Yesterday the Senate Judiciary Committee voted favorably to send sports officials assault legislation to the whole Senate for a vote, with a recommendation that the bills, if enacted, be given immediate effect.  The measure passed by a 3-1 vote with one abstention.  The bills, SB 200 and 201, are at the same point where they stalled two years ago.  We need to get them considered by the Senate as a whole.  The way to do this is by putting some pressure on individual senators and, particularly, Senator Meekhof, the Majority Leader.  A letter writing (email) and telephone campaign from officials can help.

We urge you to contact your State Senator and Senator Meekhof by email, letter and/or telephone to ask their support.  Here is a link to identify your Senator and obtain contact information:  http://www.senate.michigan.gov/fysbyaddress.html.  Below is the outline of a letter you may use as a guide:

Assaults against sports officials have increased dramatically in frequency and severity over the past several years.  I am sure you are aware of the recreational league soccer official, John Bieniewicz, who was killed on the field in Livonia by a punch from an angry player: http://www.freep.com/story/news/politics/2017/03/07/michigan-senate-panel-increases-penalties-assault-referees/98872232/.  We need this legislation now.  Young people are not becoming officials, or drop out soon after starting, because of the increasing violence and abuse referees and umpires endure.  This threatens the long-term viability of youth, recreational and school sports programs throughout the state.

I urge you to support these bills.

Earlier this week, Senator Morris Hood reintroduced the sports officials’ assault legislation which stalled in the Senate last term. The Judiciary Committee may consider the bill as soon as next Tuesday (March 7, 2017). The bill addresses assaults on officials during a sporting event. To review the bill, click here: Review Senate Bill 201

If you have been a victim of assault (as an official) and you are interested in testifying please contact Jim Dworman.  He can be contacted at jdworman@dflaw.com

There are three local senators on the committee. You can look up the senator for where you live here: State Senator Look Up  Even if you’re not covered by these senators, we strongly encourage you to make your voice heard on this matter.

Below is some suggested language that can be used when contacting your state senator. Feel free to copy and paste into an email and personalize as you see fit:

As a sports official, I’d like to bring your attention Senate Bill 201 introduced in the Senate Judiciary Committee February 28 by Senator Morris Hood. The bill addresses assaults on officials during a sporting event. It’s an important piece of legislation to protect and support the hard working men and women that give their days and nights to help make athletic contests possible. I know myself and others will be following this legislation closely and encourage you to help bring it to the desk of Governor Snyder.

Message from the MDAO Board

By now you’ve probably heard of the incident that happened to some of our fellow officials last week. The conditions and environment at Hazel Park High School that allowed this to occur have no place in high school athletics. It’s the responsibility of the site administration to provide a safe and secure setting for contests. This includes, but is not limited to:

We’re following this situation closely and the MDAO will continue to support our membership however we can. Thank you for the professionalism you all continue to display on a nightly basis. 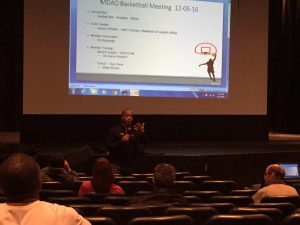 For rules questions or to share interesting situations, please send them to:

We’ll work to reply as soon as we can with rules references and interpretation. This will help us as a group learn from our experiences and better plan for meetings.